The city that never sleeps - Belgrade 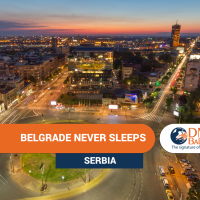 With an indelible mark of its turbulent history, successes and failures, world wars, student protests, bombing, kingdom, revolution, socialism, democracy, literally almost nothing seems to have bypassed Belgrade so far.

It has suffered a thousand blows and hundreds of sorrows but still, somehow it has managed to keep its everlasting soul.  According to the popular belief as of recent Belgrade is the new promising European capital having risen from the ashes over the past  15 years.

Serbia’s capital is special. Sure, everywhere is ‘special’, but nowhere captures the soul as vigorously as the town the Romans called Singidinum. Belgrade isn’t an easy city to love and the chances are you will struggle to accept its idiosyncrasies and frustrations, to begin with. But before you know it the city will find a way inside and by then the damage is done. Belgrade is a city that doesn’t let go, at least not until every single drop has been wrung out of its latest victim. Music, food, art, history, parks, lakes, rivers, capitalism, communism and more – Belgrade has it all.

One of the coolest parts of visiting Belgrade is exploring all of the different types of architecture on display. What makes Belgrade quite interesting is that it doesn’t really have a single look at it. Even just walking a matter of blocks across town from the fortress to the train station and you’ll see all sorts of buildings. Perhaps the greatest example of this variety is the Knez Mihajlova pedestrian street through the heart of the city.

Of the various areas in the center of Belgrade you’re bound to come across, you’ll probably find the most tourists in the vibrant district of Skadarlija. This is meant to be Belgrade’s bohemian quarter, although it seems to be full of restaurants that cater to tourists. Still, from the vibrant colors of the buildings to the bright flower arrangements, Skadarlija is certainly a visually enticing place to walk through.

While visiting churches in Western Europe can get a bit repetitive, notable ones in Eastern Europe and the Balkans are less common. Belgrade is actually home to a few, but the big one is the Temple of St. Sava. Not only is it one of the largest orthodox churches in the world, but it’s quite the looker too. The church is dedicated to the founder of the Serbian Orthodox faith, Saint Sava, and is said to be built on the site of the saint’s remains.

The city grew up around an ancient fortress on the Kalemegdan headland that was encompassed on three sides by the Sava and the Danube. The ruins of a fortress which was built to defend the city from the Ottomans, who then invaded and adapted it as their own defensive outpost. Kalemegdan is a crown jewel of Belgrade. It’s a beautiful green area and a fortress with an impressive view over New Belgrade and the Sava and Danube confluence. Today it is the city's most visited tourist attraction, where people gather to admire the fine view.

The reasons to visit Belgrade are interesting and varied, and this city is probably one of the most ignored on the European tourism map, but if you’re looking for some real Eastern European flavor, you can’t go wrong here. There are some gems in its sights and attractions, but Belgrade is really a city to experience rather than see.