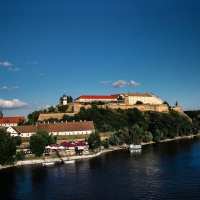 Breakfast at hotel. Than we start tour to Novi Sad. Upon arrival to Novi Sad we’ll have sightseeing tour. Tour will include visiting the Danube park, the Danube street (the oldest street of the city), building of the Patriarchate, one of the oldest cultural institutions, Matica srpska, Zmaj Jova street, the Freedom square.

After the sightseeing of Novi Sad, the road takes us to Sremski Karlovci, one of the places that are considered to be historically important for the development of the modern Serbia state. The visit to this picturesque town will include seeing the first Gymnasium in Serbia, Patriarchate building, as well as the ,,Chapel of peace’’(a place where the round table was used for the first time in the history of world diplomacy). After this we continue towards the Indjija OUTLET Shopping center. Free time at shopping center. Drive back to Belgrade. Dinner and overnight at hotel.

After breakfast we depart to Manasija monastery from 15th century which is endowment of great despot Stefan. It is one of the most beautiful and important Serbian monasteries. It is fortified with 11 towers with walls between. Inside of monastery are valuable frescoes and icons from famous European artists of 15th century.

Follows visit to Resava cave, 80 million years old which makes it one of the oldest in this region, with cave jewelry that dates 45 million years ago. It is also considered to be one of the most beautiful caves in Serbia.

In morning hours, after breakfast at the hotel, we check out and depart for the western part of Serbia, world famous for its natural beauties and wealth of gastronomic tradition.

Western Serbia, so called Serbian highlands, and Zlatibor mountain as its pearl is 200 kilometers away from Belgrade. Intact nature, hospitality and a lot of food is the things that you can find here.

Zlatibor (literally "golden pine") is one of the top tourist destinations in Serbia after Belgrade and it is also Serbia’s most visited mountain, with a wide range of opportunities for active holiday pursuits such as walking, riding bike, horseback riding, quad safari or taking part in the special slimming and healthy life programs. A mountain of exceptional beauty with a mild climate, woodland valleys, grasslands, brooks and pines.

Follows visit to Mokra Gora so called Wooden city or Kustendorf made by world famous movie director Emir Kusturica who won twice prestige Palm de Kan award for his movies, in Kan, France. It is special style village made for movie set but now is one of the most popular tourist attractions in this region. This unique fairy tale place is consisted of traditional wooden houses from different parts of western Serbia with many additional facilities.

This is the place of famous Kustendorf movie festival which many Hollywood stars attended: Johnny Depp, Monica Belluci, Nikita Mihalkov etc. We will have lunch in local restaurant with amazing specialties. Trip back to Belgrade. Dinner and overnight.