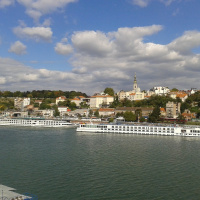 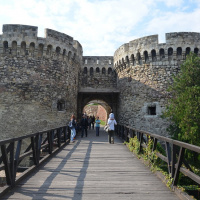 Breakfast at hotel. We start and proceed  to the city of Smederevo. In the 15th Century, Smederevo became the capital of Serbia and the fortress was built in a very short period of time. Built at the confluence of the Jezava and Danube rivers on the orders of Serbian Despot Djuradj Brankovic, it was the biggest low-land fortress in Serbia. Visit Viminacium archaeological park, once the capital of the Roman province of Moesia Superior. See the bust of Constantine the Great and 17 more Roman emperors born in Serbia, as well as the amazing mosaic decorated floor. A special attraction here is the paleontological park with a mammoth skeleton discovered at a depth of 27 meters (one million years old). Drive to Golubac fortress, built on the rock at the entrance to the Iron Gates. Built in the 14th Century, this fortress was once under the rule of Hungarians, Serbs, Turks, and Austrians. With strong walls and an ideal strategic location, this fortress has never been overrun. Located at the point where the 6 kilometers wide Danube enters the narrow passage through Djerdap Gorge, this stronghold controlled the navigation on Danube River. Dinner and overnight at hotel in Belgrade.

After breakfast at hotel a day spend to exploring the surroundings of Belgrade in this excursion an hour north to Novi Sad. Once the border area during the great Austro-Ottoman war, the second-largest city in Serbia is now a cultural, economic, and trade center.

Visit the Greek school and the Old Matica Srpska Library and Gallery, before viewing the intricate and iconic art inside the Orthodox Cathedral. Stop by the Petrovaradin Fortress, located on the Danube, which has been converted into a town museum. Continue on to Sremski Karlovci for historical and artistic sightseeing, which includes many churches and museums, as well as wine cellars. You will also spend some time in nature at Fruska Gora, a mountain lined with wooded hills alongside the Danube River. Famous for its vineyards and 17 monasteries from the 15th and 16th century, Fruska Gora is a representation of the spiritual center of the Serbian nation. There is an option to visit one of the monasteries here. Dinner and overnight.